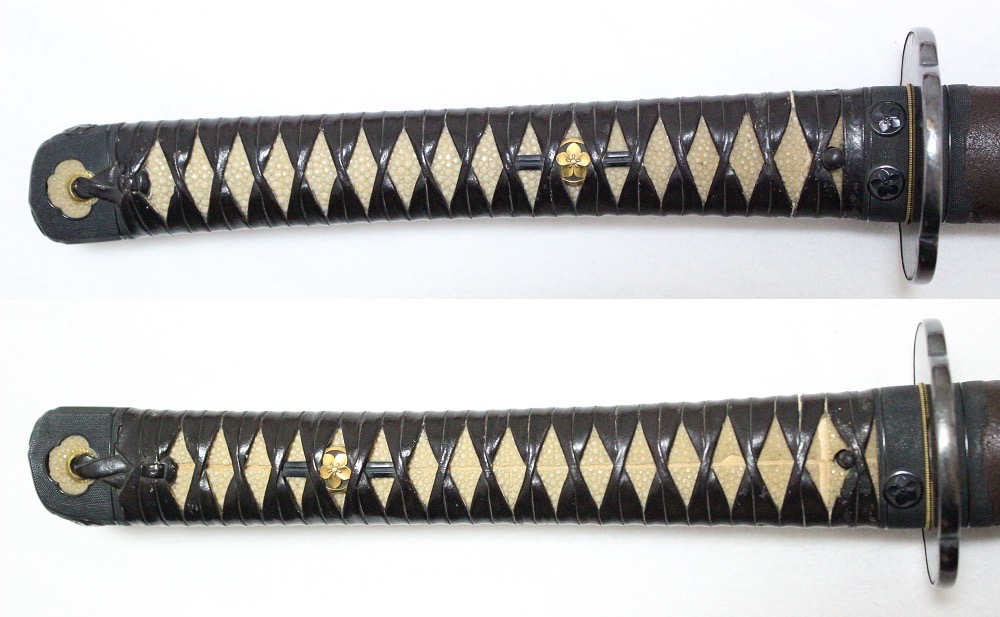 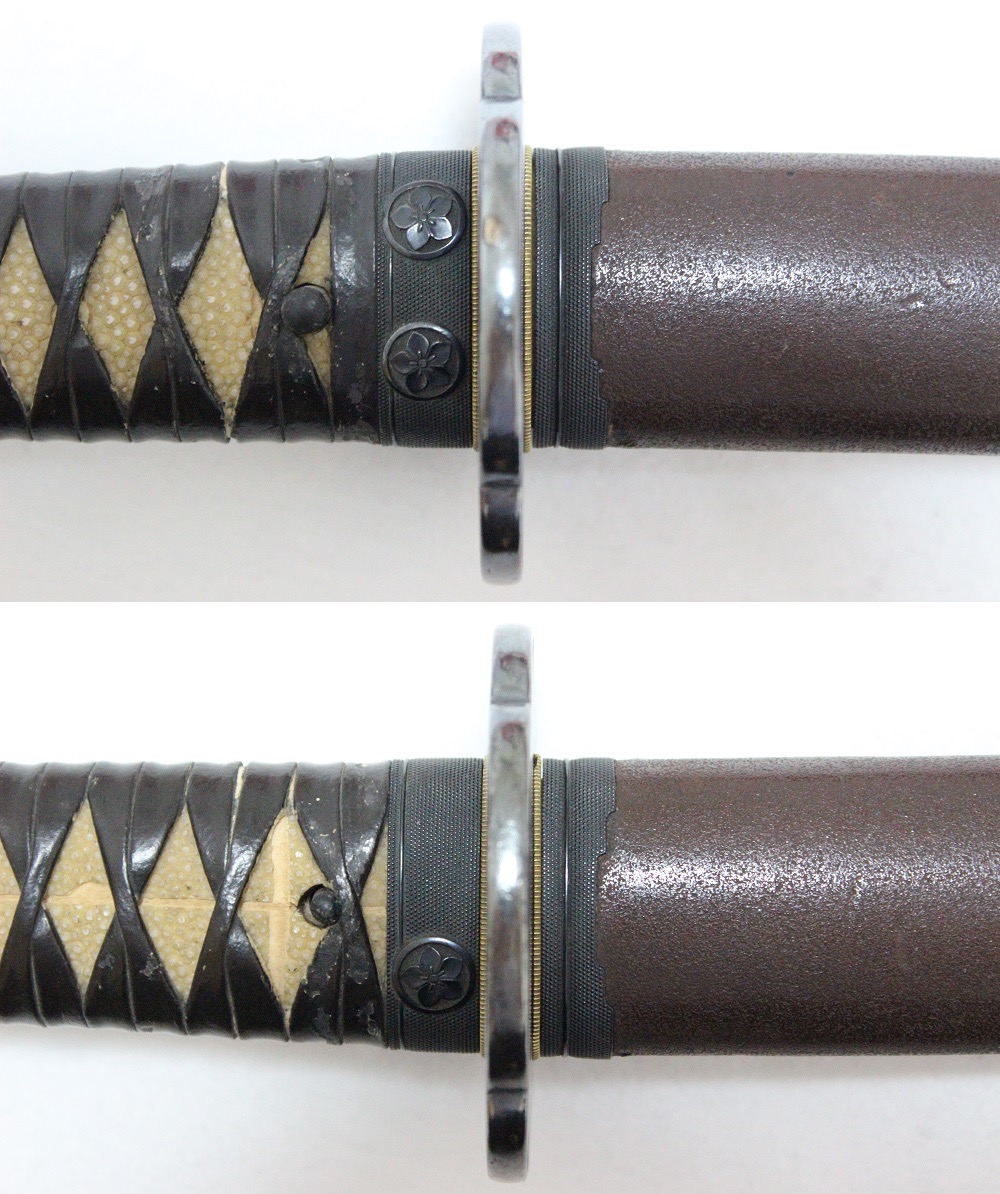 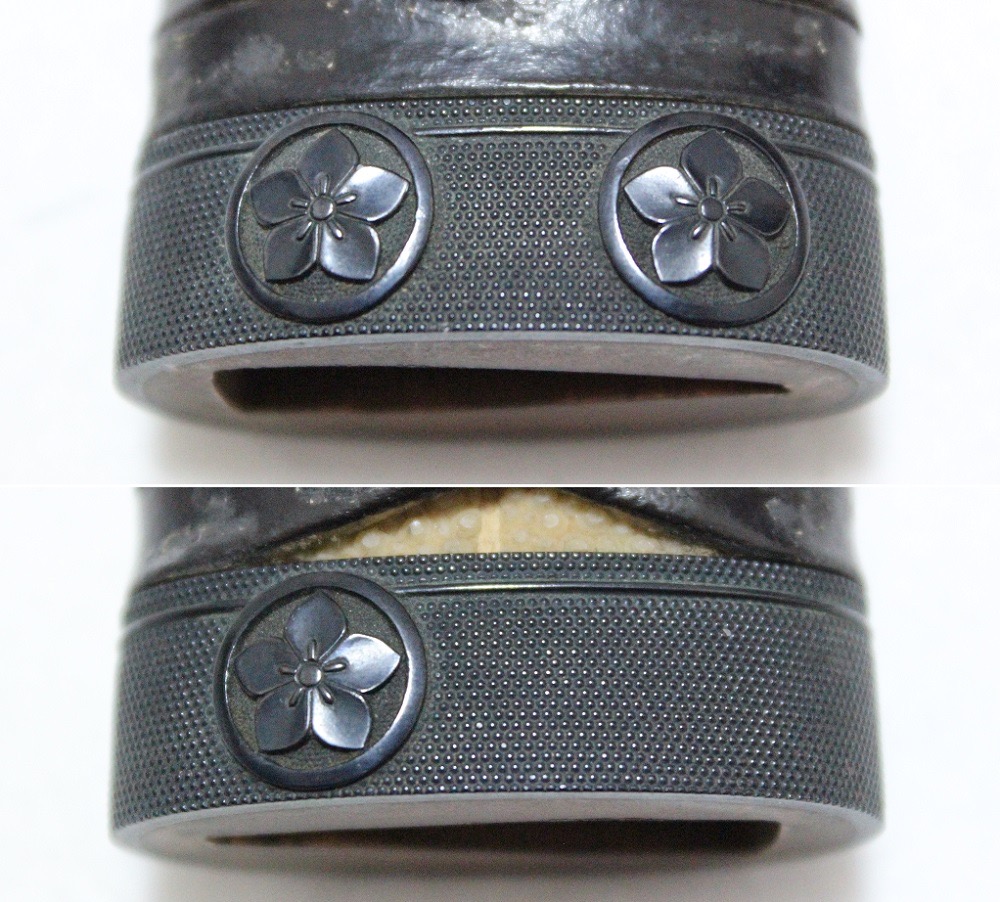 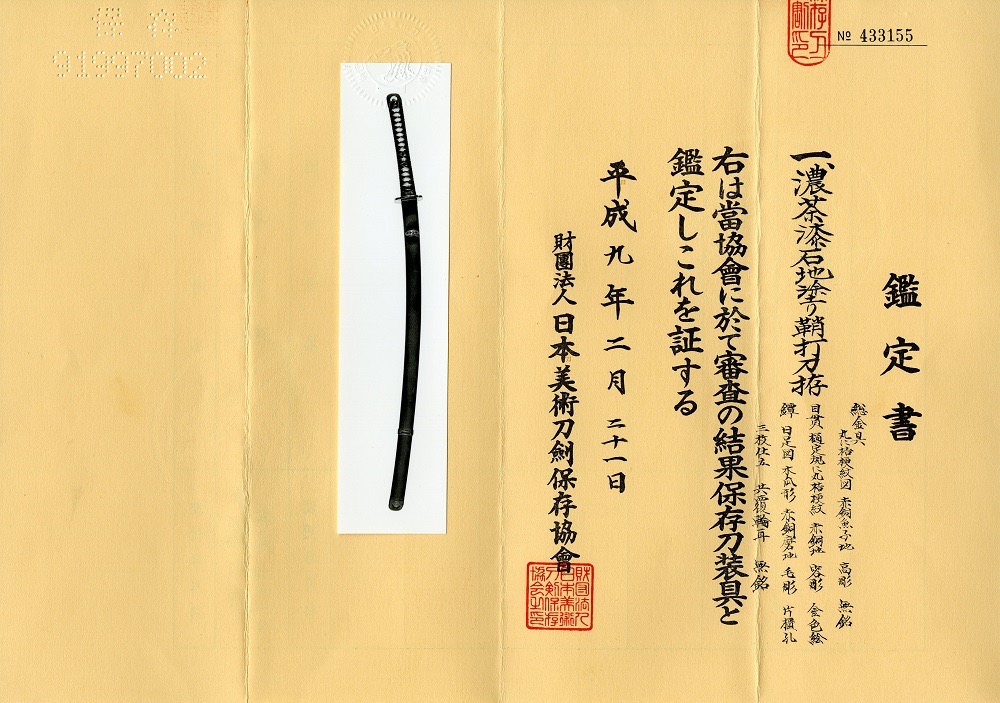 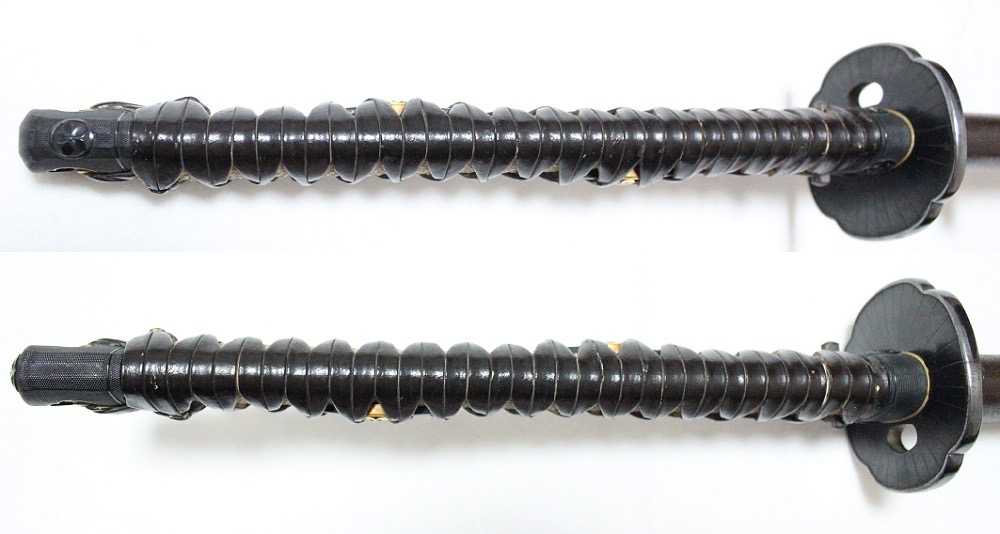 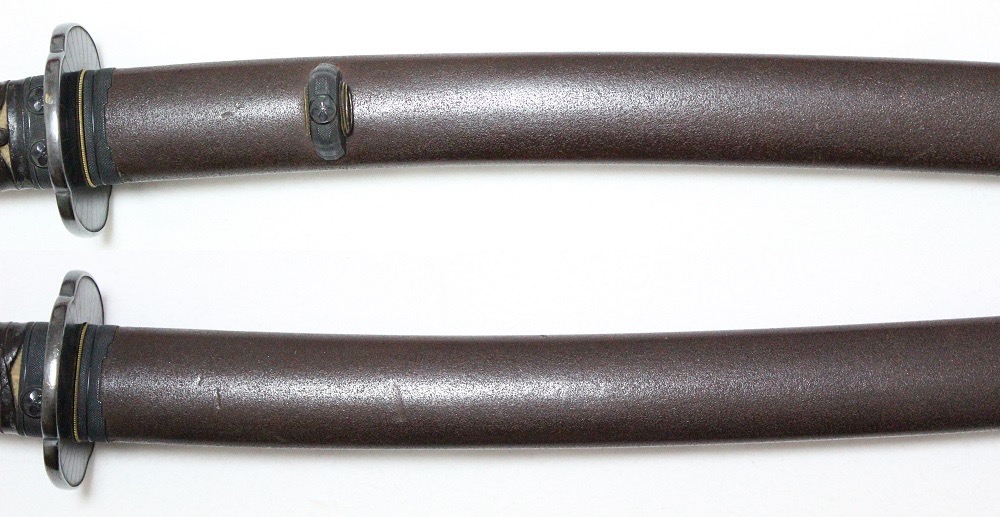 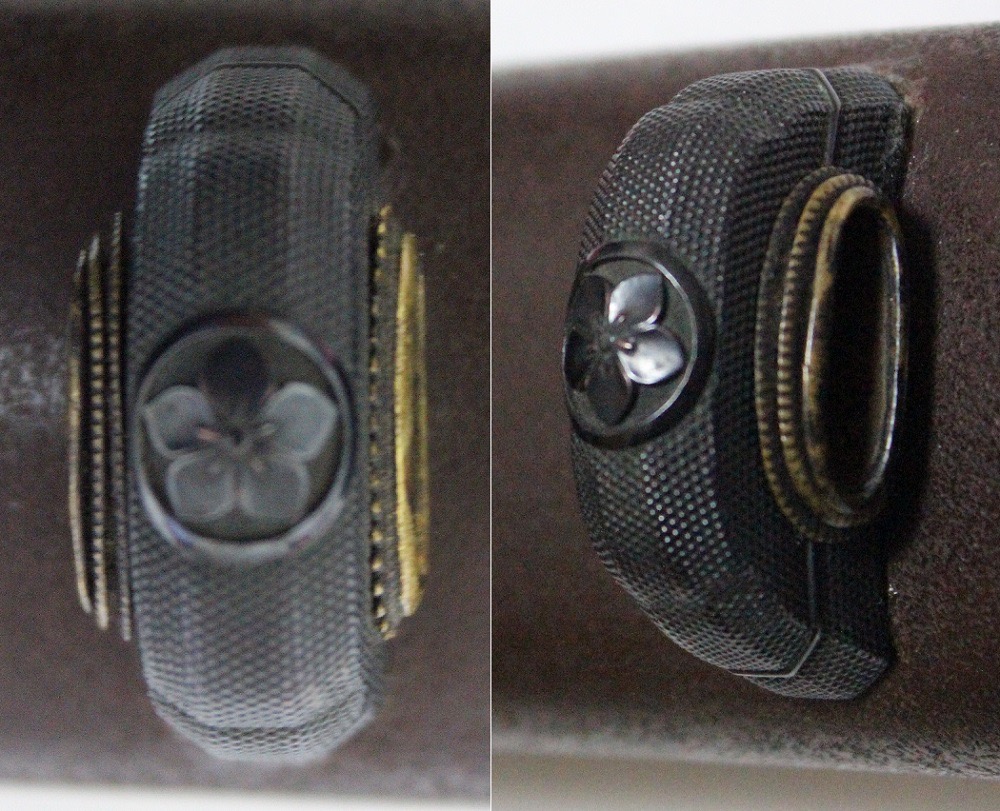 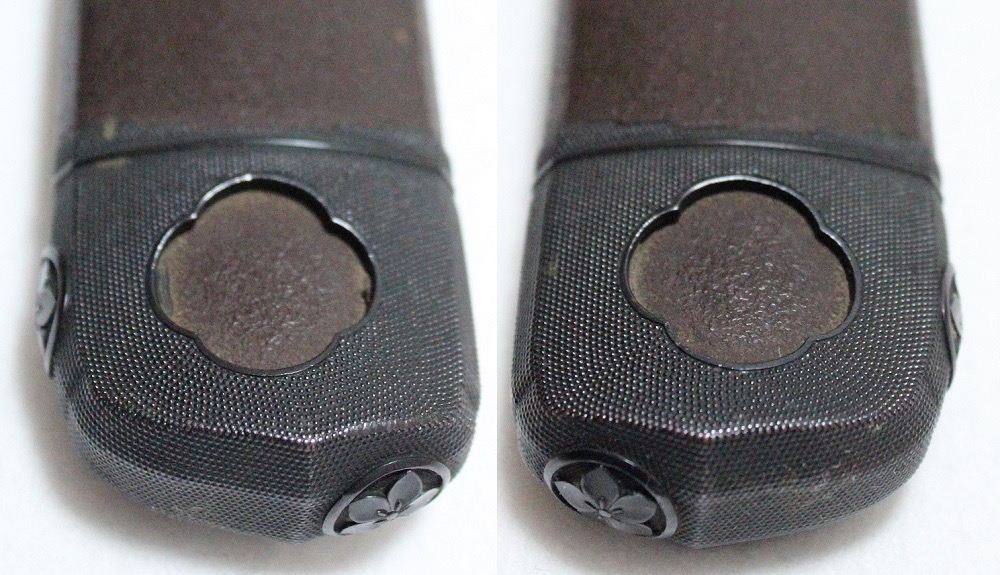 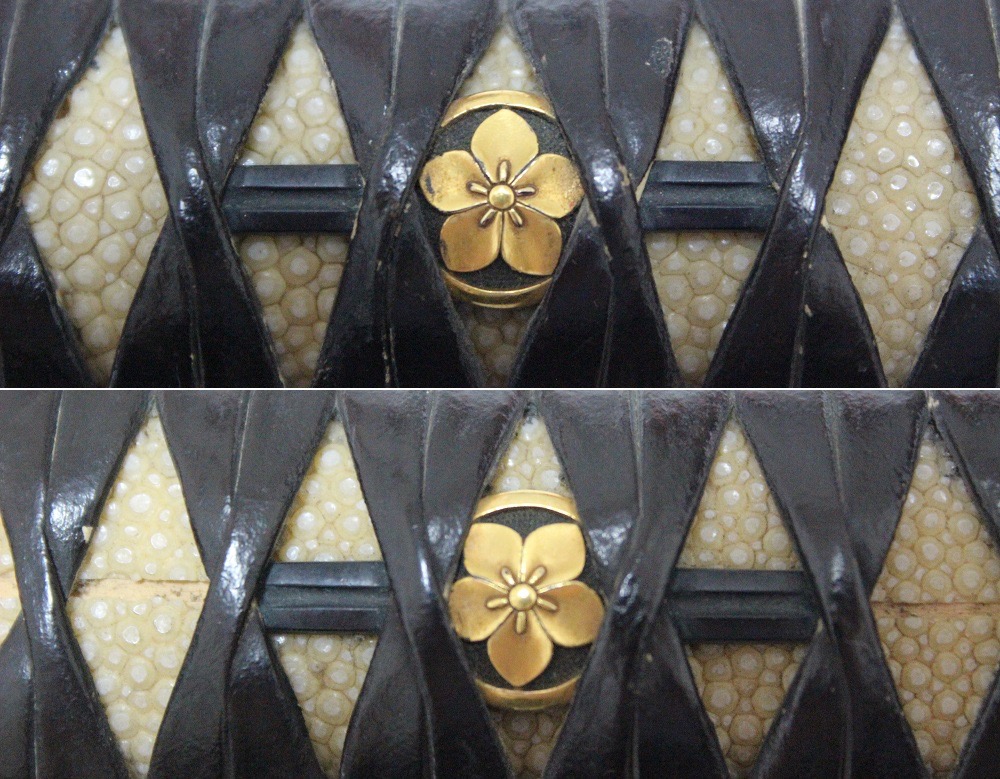 fittings have a Maru-kikyomon design, and are made of Shakudo with a Nanako design using Takabori technique (Mumei)

Tsuba: Made of Shakudo with a Hiashi pattern in a Yotsumokko shape with a Shakudo rim, using Kebori technique. The tsuba has a single hitsuana, and is made in 3 layers (Mumei)

The daishō (大小 daishō?) - literally "big-little"] is a Japanese term for a matched pair of traditionally made Japanese swords (nihonto) worn by the samurai class in feudal Japan.

The etymology of the word daishō becomes apparent when the terms daitō, meaning long sword, and shōtō, meaning short sword, are used; daitō + shōtō = daishō. A daishō is typically depicted as a katana and wakizashi mounted in matching koshirae but originally the daishō was the wearing of any long and short uchigatana together. The katana/wakizashi pairing is not the only daishō combination as generally any longer sword paired with a tantō is considered to be a daishō. Daishō eventually came to mean two swords having a matched set of fittings. A daishō could also have matching blades made by the same swordsmith, but this was in fact uncommon and not necessary for two swords to be considered to be a daishō, as it would have been more expensive for a samurai.

The concept of the daisho originated with the pairing of a short sword with whatever long sword was being worn during a particular time period. It has been noted that the tachi would be paired with a tantō, and later the uchigatana would be paired with another shorter uchigatana. With the advent of the katana, the wakizashi eventually was chosen by samurai as the short sword over the tantō. Kanzan Satō in his book titled "The Japanese Sword" notes that there did not seem to be any particular need for the wakizashi and suggests that the wakizashi may have become more popular than the tantō due to the wakizashi being more suited for indoor fighting. He mentions the custom of leaving the katana at the door of a castle or palace when entering while continuing to wear the wakizashi inside.

According to most traditional kenjutsu schools, only one sword of the daisho would have been used in combat. However, in the first half of the 17th century, the famous swordsman Miyamoto Musashi promoted the use of a one-handed grip, which allowed both swords to be used simultaneously. This technique, called nitōken, is a main element of the Niten Ichi-ryū style of swordsmanship that Musashi founded.

The wearing of daishō was limited to the samurai class after the sword hunt of Toyotomi Hideyoshi in 1588, and became a symbol or badge of their rank. Daishō may have become popular around the end of the Muromachi period (1336 to 1573) as several early examples date from the late sixteenth century. An edict in 1629 defining the duties of a samurai required the wearing of a daishō when on official duty. During the Meiji period an edict was passed in 1871 abolishing the requirement of the wearing of daishō by samurai, and in 1876 the wearing of swords in public by most of Japan's population was banned; this ended the use of the daishō as the symbol of the samurai, and the samurai class was abolished soon after the sword ban.